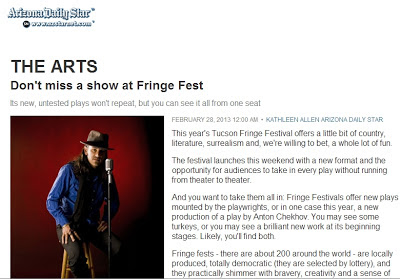 For this article, each of the Fringe producers was asked to email back responses to a handful of questions.  Unfortunately, not all of the answers were printed, despite my answers being very good.

[BLOG EXCLUSIVE] Below is the (almost) full text of my response to the reporter [I'm not giving you lot my phone number for any follow-up]:

-------------
Name of play: "William (the snowman)" as part of the "Slideshow Fairytales" series, which isn't so much a play as it is a version of storytime, the kind that people may have experienced in childhood, but with less artistic talent and more four-letter obscenities

Genre (musical, comedy, drama, bio-play, etc): I had to come up with my own genre to most accurately describe my work: "Bullshiterature." The creation of the genre was inspired by a lack of talent and a Vonnegut quote ("Literature should not disappear up its own asshole, so to speak"), but mostly it was a lack of talent.

What's it about (try to be brief): It's a tale of self-discovery, a journey through the metaphors, allegories, and (something I've taken to calling) "metagories" of life, but with a twist. William is a snowman and he has a problem. By the end of the story the audience will learn William's fate, and whether or not he was ever actually a snowman or if he he even had a problem.

What prompted your writing it: I first began writing the tale of William during a late December, so the time of year was partly responsible, but mostly I was trying to impress a female.

Three good reasons why we should see it (you can be funny, irreverent, serious, whatever you want here):

Running time: Approximately one hour, depending on audience interruptions

Other plays you've written (if you are amazingly prolific, just give me your three most recent titles; If a play has won Tonys or Pulitzers, etc., be sure to mention that. If you see such an award in the future, heck, let us know): "The Starter House," which was the top-drawing show of last year's Tucson Fringe Festival; the short-short "The Length of Love"; as well as the as-yet-unproduced "The Robot's Wife's Sister," "The Best Medicine," and "Love's Bad Name."

Anything else you want me and/or readers to know: I'm really not as bad as I first come across as--I'll (possibly) grow on you!  Maybe.
Posted by Catfish at 1:51 PM