(Writers Group) 10-Minute Free Write Based on a Photo 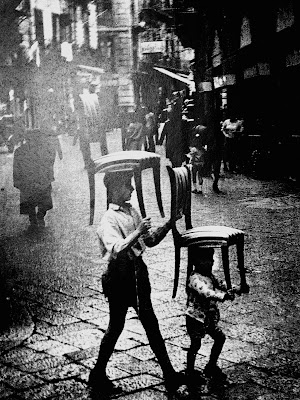 "Dennis," Bobby asked, "why do we have to walk with the chairs on our heads?"

Dennis, the older of the two tried to ignore his younger brother.  He knew it would be pointless, though.  After a few minutes of silence, Bobby would plead and whine for answers.  After a few more moments of compounding silence on Dennis' part, Bobby would be on the verge of tears.

"You know why, Bobby.  Mother has told you countless times."

That was the problem with younger brothers—they always had questions, and “because that’s just the way it is” was never an acceptable excuse in their eyes.  A year ago the boys’ father, Samuel, had been arrested for breaking into R.J. McMillan Chair Factory and Showroom.  For the third time.

Just like he had the two previous times, Samuel drank too much (“Why did he drink so much?”) and in his stupor, broke into McMillan’s (“Why the chair factory?”), dropped his trousers (“How come?”), and proceeded to sit his naked bottom down on each of the assembled and partially-assembled chairs.
Posted by Catfish at 9:06 PM