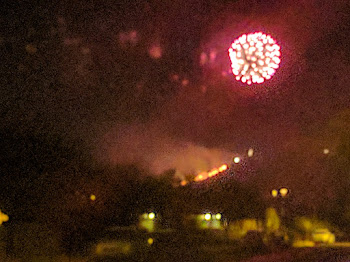 Last night, I walked down 18th Street from my home, maybe about half a mile or so, to watch Fourth of July fireworks.  Every year, Tucson launches a barrage of sodium, copper, lithium, and barium into the night sky from the backside of Sentinel Peak, and for at least the last decade or so, I've put no real effort into watching them.  There are exploding colors.  There are exploding claps.  Dogs hate them.  Vets hate them.  A lot of people stand around.

It's a program I've seen before.

In my childhood, before my parents divorced when I was 11, my mother, siblings, and I would making the trek from the eastside to downtown Tucson.  Typically, we’d go with uncles and cousins.  My immigrant father, living up to the stereotypes, was typically busy working his low-wage job at 7-11.  Not even the pleas of his young children were enough to make him realize that it was his patriotic duty to watch fireworks and eat hot dogs and potato salad.

Even as a child, I hated what was involved in seeing fireworks: driving across town to a place downtown or nearby where everyone else from Tucson was also headed, to try and find an empty spot to lay down a blanket to sit on, but if you want a remotely decent spot, you need to arrive early.

There was a lot of waiting around.

I have changed very little since my childhood, it seems.

And once the fireworks were over, all of Tucson would try to leave at the exact same time.  The streets were clogged.  Traffic, if it was lucky, would crawl.  And the small children in the backseat became impatient and bored.  Sometimes they had to pee.

With these vague, fuzzy memories, it's little wonder why I was never in a rush to replicate these adventures as an adult.  Still, though, I've maintained a mild fascination with the fireworks, if only because of my repressed and undeveloped interest in photography.  Those aerial explosions were the model I could not seem to photograph.  Maybe I could sneak off a few shots with my cellphone while she wasn't looking.  Or, maybe I could creepily use a better camera, but from a distance so she doesn't see me fawning.

The results were always lacking, and each time I'd tell myself, "Maybe next year."

And so next year became this year, and, after moving last fall, I found myself only about two miles from Sentinel Peak.  Every day, each time I caught a glimpse of the whitewashed “A” that the mountain showed to the city, it was hard to not think to myself how close the mountain was, how close those fireworks would be.  Finally, those photos would be great.

But they weren't.  Because last night I still couldn't commit to capturing her beauty, despite being so close, I opted to just use my cellphone.

So, instead, my phone captured blurry, out-of-focus, and poorly timed tableaus of what freedom looks like.  After a while I gave up and watched the explosions and thought about my life.  Because that's what you do when you stand and stare at something in the sky right?

I thought about it all.

And when it was all over, I walked home.  No danger of being caught in traffic this time.  Maybe next year I'll be fully prepared to get those photographs I want to get.  It's a lot closer now.
Posted by Catfish at 10:18 AM