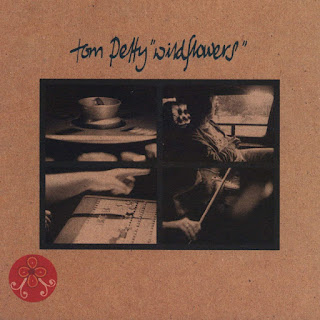 Tom Petty first entered my awareness when I was in junior high.  “Mary Jane’s Last Dance,” one of two new tracks recorded for a greatest hits compilation, was released in 1993.  The song, and the video for it, were EVERYWHERE.  “Wow,” I remember thinking, “who’s this new upstart?”  Joke was on me, because Mr. Petty was already in the midst of an impressive decades-long career (but, actually, the joke is on you, because I never called him a “new upstart”.)  Anyway, I’m sure I eventually got my own copy of that greatest hits album (probably from the Columbia House Record Club).  Then I think I got the soundtrack to “She’s the One.”  Probably also from the Columbia House Record Club.  I slowly started working my way through his back catalog, buying whatever I could find used at Zia.  I think ‘Wildflowers’ was the last of his back catalog albums that I picked up.  I was married and miserable.  Working a shitty overnight job at Home Depot.  Life felt rough.  One night at work, I was at the end of the BBQ aisle, and the song “Time to Move On” came up and I was just overwhelmed.  I needed to make changes in my life.  And I got on that right away… 18 months later.  The song “Crawling Back to You” has also always resonated me, and has made me wonder if it has shaped the way I love, you know, back when I loved.  Anyway, you know how I mentioned “Mary Jane’s Last Dance”?  Well, Tom Petty was in the midst of recording an album when he had to cut that track for his greatest hits collection.  The album he was recording?  ‘Wildflowers.’  Boom.
Posted by Catfish at 9:05 AM