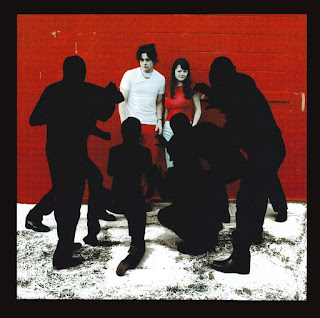 For the most part, I’ve never really been one to keep up with current music.  While my peers were maybe listening to Nirvana and Beck, I was listening to Jimi Hendrix and “In-A-Gadda-Da-Vida”  (the song, NOT the album).  By the time I thought to give ‘Nothing’s Shocking’ a listen, Jane’s Addiction had already broken up and reunited.  And other anecdotes about how out of touch I am!  Laughter!  Laughter!  I didn’t know that The White Stripes existed until I heard the second single released from this album, “Fell in Love with a Girl.”  Can you believe it?  A song with prominent, fuzzy guitar caused my heart to go pitter-patter pitter-patter.  Me!  So, for a brief period of time I started to look around at what was going on, and I found bands like The Datsuns, The Hives, Soledad Brothers, The Mooney Suzuki, The Black Keys, Yeah Yeah Yeahs, and Kings of Leon.  But sometimes you can go too far, and that’s how you wind up with three Jet 12” singles.
Posted by Catfish at 11:49 AM

Email ThisBlogThis!Share to TwitterShare to FacebookShare to Pinterest
Labels: 10 albums in 10 days, music, the white stripes