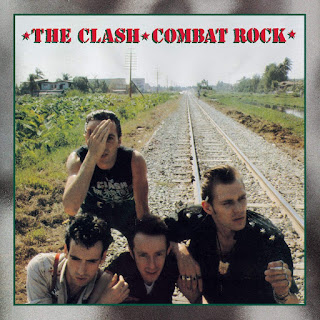 I think I was supposed to pick ‘London Calling,’ but I didn’t.  Just know that I’m probably just as disappointed in me as you are.  Actually, more so if I really start to think about ALL of my life decisions.  You’ll probably (not) be surprised to hear that I picked up this album on CD in high school.  I promise, not all of my 10 days will be albums that I discovered in high school.  “Rock the Casbah” was the first song I heard by The Clash, but I can’t remember exactly where.  I have a vague recollection of hearing it on an episode of The Simpsons.  But maybe I saw the music video for it before that?  Who can say.  Sophomore year, in English class, I was writing a short story about two monkeys in North Africa.  Naturally, “Rock the Casbah” came to mind and I realized that I needed to get the album it was on.  Did you know the original title for this album was ‘Rat Patrol from Fort Bragg’?  Did you know that I bought a bootleg version of it on vinyl from Amoeba Records that one time I was there?  Did you know that I didn’t realize what it was until putting together this write-up and that I still haven’t listened to it?  I *told* you I was disappointing!
Posted by Catfish at 10:13 AM

Email ThisBlogThis!Share to TwitterShare to FacebookShare to Pinterest
Labels: 10 albums in 10 days, music, the clash