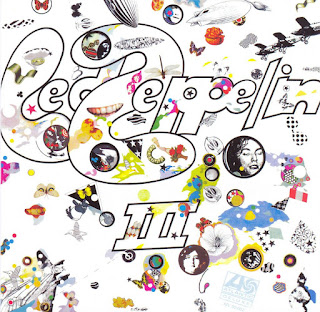 It’s hard to pick a single Led Zeppelin album to include, but obviously, I need to include one.  This isn’t my favorite Zeppelin album, though, in all honesty, I don’t know if I could pick a favorite.  They all have their advantages, even Coda (don’t believe me?  Check out the 2015 reissue!)  I haven’t actually listened to this album in a while because of [REASONS].  When I started junior high, I was going to a different school than all of my friends.  All because someone told my mother that I was “gifted and talented.”  Joke was on them; I was neither!  The bus ride to school wasn’t fun.  There was this older, loud, brash cool kid named (I think) Jake.  Jake did me the huge favor of letting the entire bus know that my resting depressed face made me look like I was constipated.  Further, he did me a solid by reminding everyone of that by calling me “Constipated Boy.”  I guess people who can’t shit look sad?  I dunno, but that actually tracks.  For some reason, this torment didn’t make 11-year-old me any less sad.  Go figure.  Anyway, the bus driver would listen to the local rock station in the morning and that’s primarily how I was exposed to music.  One day, I heard this song and it just got stuck in my head.  I had no idea what it was called or who did it, but there it was, lodged in my brain matter.  It had this wail and this riff!  I’m really awful at describing sounds.  A howling wail, maybe?  And a thundering, repeated riff, perhaps?  “Ahh ahhh-ahhhhhhhhhhhh ahhh.”  So time goes on and this song is still stuck in my head.  Eventually I get into Led Zeppelin, because that’s what happens when your friends get into Led Zeppelin: you get inducted into that club.  It’s contagious.  And eventually I got my hands on a copy of Led Zeppelin III, probably CD at first.  Imagine my surprise when track #01, “Immigrant Song,” comes on and it turns out to be the song that was stuck in my head for years.  And that’s how Led Zeppelin got into my blood and bones.

This album has a reputation for being pretty heavy on the acoustic stuff, but It has the aforementioned electric “Immigrant Song,” plus “Celebration Day,” “Since I’ve Been Loving You,” and “Out on the Tiles.”  A little bit of something for everyone.  Also, the cover art is pretty awesome.  It’s got a volvelle and shit.  I’ve had a copy of the album framed and hanging on my wall for years, which, admittedly, does slightly limit access to the volvelle somewhat.
Posted by Catfish at 12:45 PM