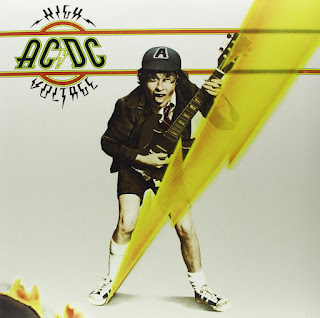 This is the first album I ever bought on vinyl.  I was maybe 15 at the time?  I bought it at Bookman’s with trade credit given to me by Jon Parr.  Possibly partly as recompense for that time he ruined my family’s desktop computer, or maybe it was the time he cut me with a knife at a party?  It’s difficult to remember.  Years earlier, in junior high, I remember when he spat on me because I asked if the rumors I heard on  the bus about him liking Angela were true.  ¯\_(ツ)_/¯  That was Jon.  Anyway, this was my first AC/DC album and it turned me into a fan of the band (when Bon Scott was the lead singer).  People complain about all AC/DC songs sounding the same, but imagine how pissed you’d be if you bit into an apple only to discover that it tasted like a potato.  Back when I was open to loving people, discovering that a woman also was a fan of AC/DC would make me get dumb, giant heart eyes, just like that emoji.  Idiot...
Posted by Catfish at 11:33 AM