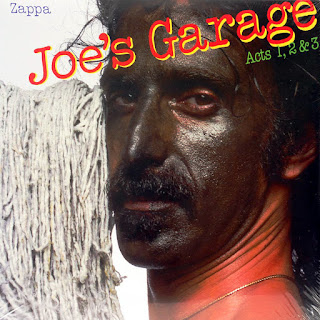 This was my first exposure to Frank Zappa.  I don’t typically enjoy musicals; they mostly make me want to shoot my brains out, but I make an exception for the rock opera that is Joe’s Garage.    My mom’s second husband brought his small record collection with him when he moved into our house, and that’s when I discovered Acts II-III of this album.  The first time he ever moved out, I hid this record so that he couldn’t take it with him.  That’s how much it meant to me.  Eventually, he moved back in, but when the entire family moved out of the house years later and left me behind to take care of it and pay the mortgage, I resorted to my old tricks and again hid the album.  This time it was for good, though.  I didn’t hear Act I until I got the CD version of the album from (I think?) the Columbia House Record Club.  Anyway, in the the 12th track, “Why Does it Hurt When I Pee?,” the titular Joe laments and questions why it hurts when he pees.  In my senior year of high school, at some school-wide picnic, I got the DJ to play “Why Does it Hurt When I Pee?”.  It wasn’t hard at all.  I had hoped to shock the entire school, but I don’t think anyone really noticed.  Well done, Baruni!  I lost my CD copy of the album when I loaned it to a girl and never got it back.  So it goes.
Posted by Catfish at 2:52 PM